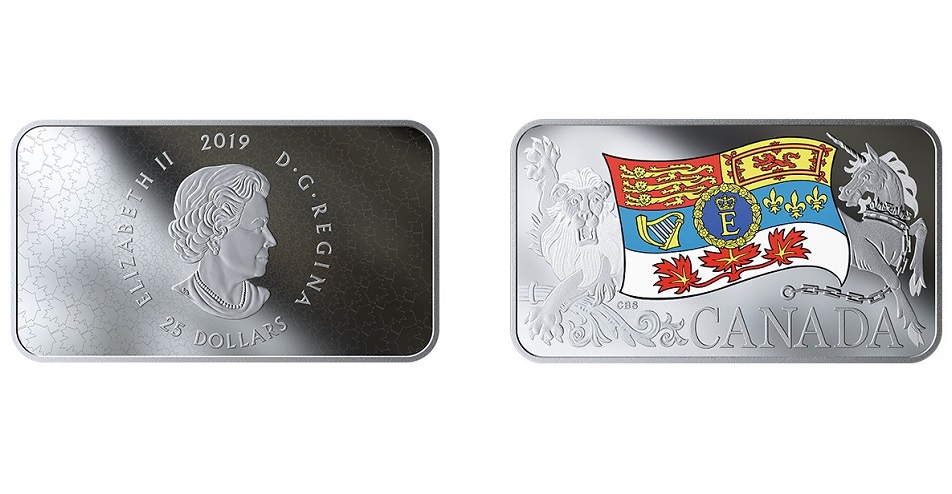 The Royal Canadian Mint has released new rectangular coins which feature a flag never before included on a Canadian coin. The Queen’s personal banner is the foremost flag of the Crown in Canada and was specially created for Canada’s Head of State. Since its adoption in 1962, Her Majesty Queen Elizabeth II’s personal Canadian flag has adorned countless buildings, ships, aircraft, and vehicles during 20 official tours. The Canada-specific royal flag is only flown in the presence of Queen Elizabeth II, and it salutes Her Majesty as the Queen of Canada. First adopted in 1962 and first used in 1964 during a royal visit, the Canada-specific royal flag is based on the Arms of Canada and reflects Her Majesty’s official title as Queen of Canada. The banner is a striking reminder of the enduring connection between Canadians and Her Majesty, who, for over six decades, has dutifully embodied the Canadian state.

Canada was one of the first Commonwealth realms to create personal flags assigned to other prominent members of the Royal Family and while they are residing in Canada, their banners, which are all based on the flag depicted on the coin’s reverse, are displayed similarly to the Queen’s banner. In 2011, the Canadian Heraldic Authority unveiled two new royal flags that were created for His Royal Highness Prince Charles, The Prince of Wales, and His Royal Highness Prince William, The Duke of Cambridge. Several other royal flags have since been created.

Designed by Cathy Bursey-Sabourin, the rectangular-shaped coin features a vividly coloured rendering of Her Majesty Queen Elizabeth II’s personal Canadian flag. It is depicted in motion, with slightly lighter colours to simulate the effect of sunlight shining through the flag material. The royal flag consists of the escutcheon of the Arms of Canada in banner form, surmounted by Her Majesty’s device:

A blue roundel with the letter “E” surmounted by the Royal Crown and framed by a gold wreath of Tudor roses.

Along with a decorative scroll, the lion and unicorn supporters of the Arms are inspired by the stone-carved façade of Rideau Hall in Ottawa, Ontario, and the bronze door plates that adorn the Queen’s entrance at the official residence of the governor general of Canada. The obverse features a concentric pattern of maple leaves and the effigy of Her Majesty Queen Elizabeth II by Susanna Blunt. The denomination of 25 DOLLARS is placed below the Queen’s likeness. 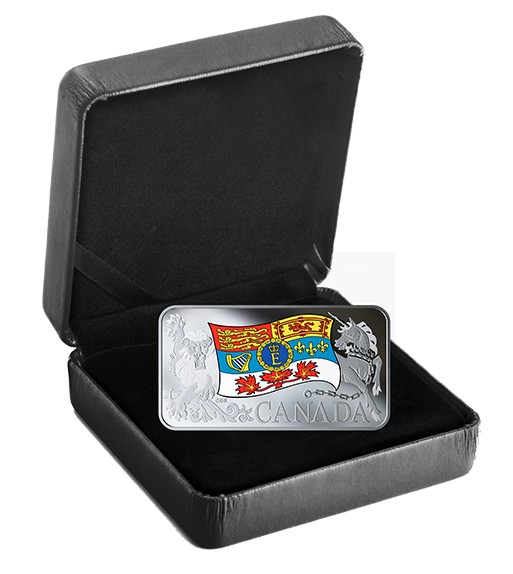 The encapsulated coins are presented in a custom branded Royal Canadian Mint-branded case that also includes a certificate of authenticity. For additional information about this coin and others available from the Royal Canadian Mint, please visit their website.