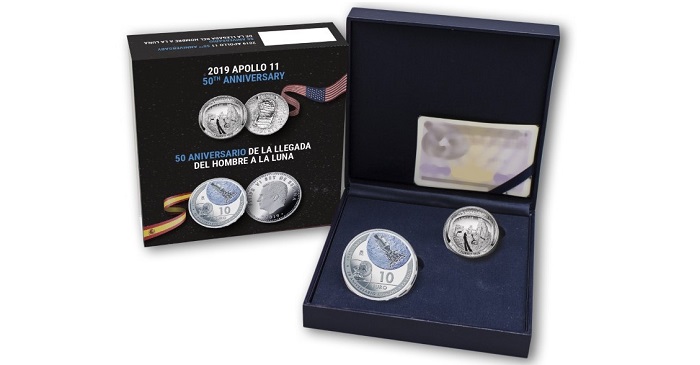 The Apollo 11 mission blasted off on the 16th July 1969 with Armstrong, Aldrin, and Collins on board. Their mission was to land on the Moon and safely return home to Earth. This was achieved on the 20th July 1969 when the Lunar module touched down on the Sea of Tranquility, a familiar area of the Moon’s surface. Hours later, in what was an epic historical achievement that was only dreamed of before, Astronaut Neil Armstrong set foot on the surface of the Moon.

Using sophisticated communications technology available at the time, which benefited from earlier space exploration and missions, the world was able to witness this accomplishment as it was happening, live on television, thanks to satellites and a slightly delayed transmission. The unforgettable words relayed back to planet Earth by Armstrong the moment he set foot on the Moon’s soil was carried practically by every news and media service:

It’s one small step for man — one giant leap for mankind.

Before the Apollo 11 mission even blasted off, NASA set up three monitoring facilities which were strategically located in Goldstone, California — Canberra, Australia, and Robledo de Chavela in Madrid, which guaranteed the monitoring of the interplanetary spacecraft 24 hours a day, 365 days a year, and covered 120 degrees each of the airspace of the Earth. 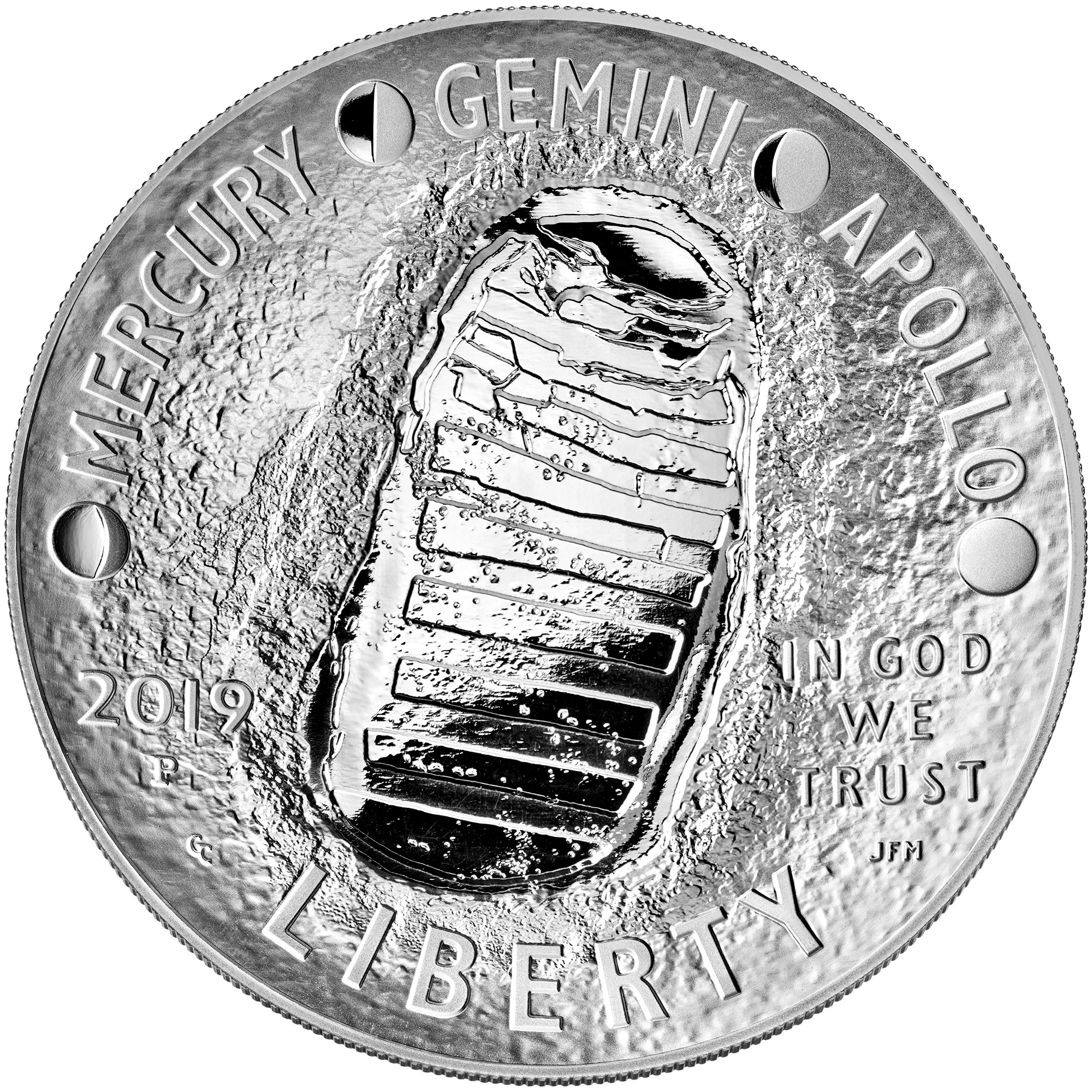 One coin included in the two-coin set is the 2019-dated half dollar concave base metal coin struck by the U.S. Mint in celebration of the 50th anniversary of the Apollo 11 mission landing on the Moon. 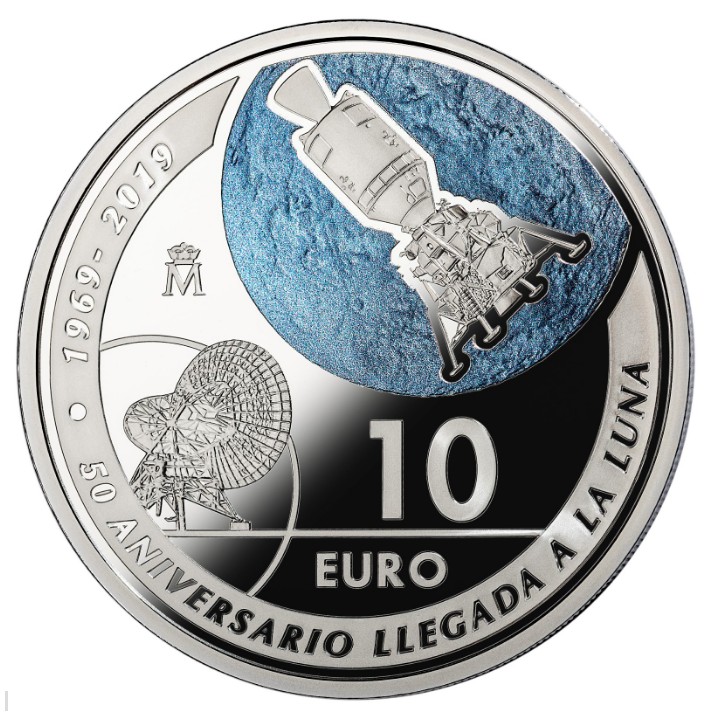 The second coin included is struck by the Casa Real de la Moneda and depicts the satellite based in Robledo de Chavela, along with the Lunar module which landed on the Moon, and a colour-applied image of the Moon itself. The inscription 50 ANNIVERSARIO LLEGADA A LA LUNA is placed along the lower edge. The commemorative years 1969 – 2019 are also included and shown above and along the upper edge. The coin’s denomination of 10 EURO is placed below the lunar module. 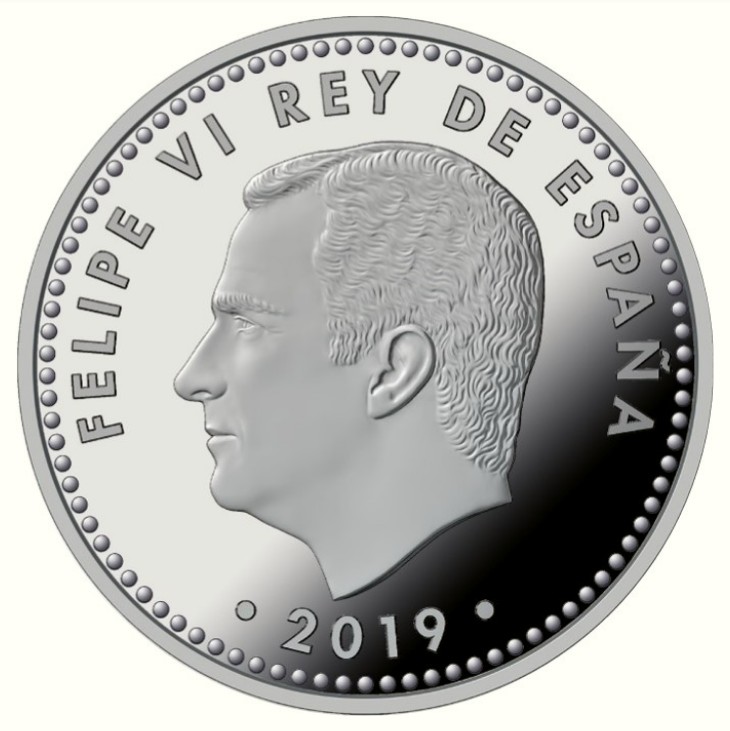 The obverse side of the coins includes an effigy of HM King Felipe VI, along with his legend surrounding his likeness, with the year of issue shown below the king’s portrait. 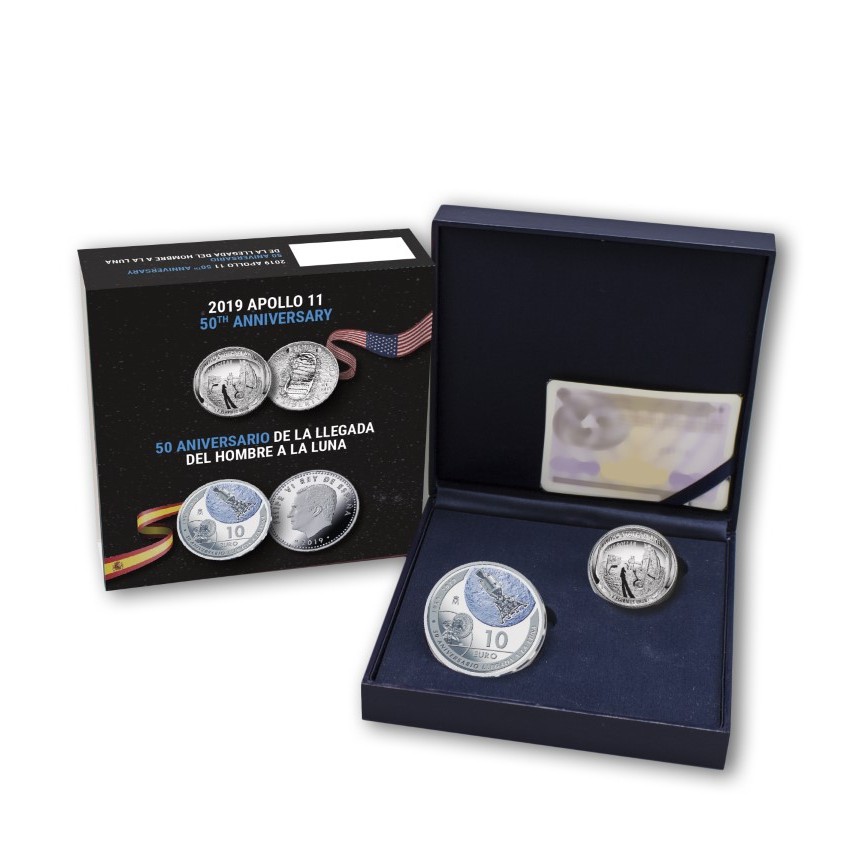 Both the U.S. clad cupro-nickel and silver coins are encapsulated and presented in a custom Real Casa de la Moneda case, accompanied by a numbered certificate of authenticity. The Spanish 10-euro coin has a maximum mintage of 10,000 pieces and is also available separately as a single purchase. For additional information about these coins and other coins offered by the FMNT – Real Casa de la Moneda, please visit their website.